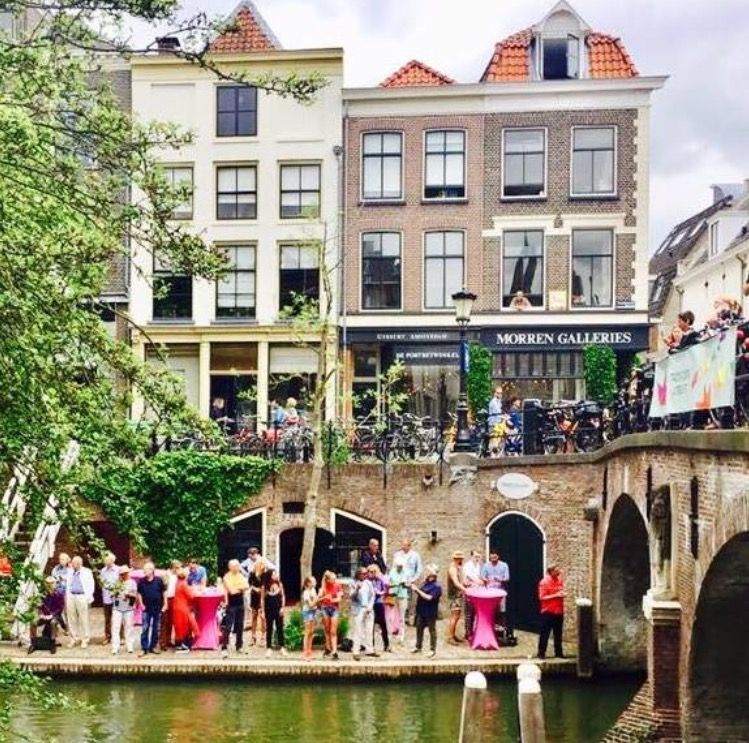 Eric Morren opened his first gallery in the historical heart of Utrecht on theOudegracht 340. His father was director at a large printingfirm, so Eric decided to attend the Graphic Lyceum in Utrecht. But his dream was to start his own gallery. At the age of 22 he realized his dream. In 1995 his wife Séverine Morren joined in and became partner. Séverine, who was 20 at that time, attended the Balletacademy in Amsterdam, but did not finish it. Before she started working with Eric she was travelling and working abroad (US and France) for two years. This first gallery seems small on the outside but is surprisingly spacious on the inside with two floors. The ground floor consists of several rooms and the 15th century canalside cellar houses medieval vaults and a professional kitchen. Since its opening this gallery represents contemporary realism which is executed in age-old traditional techniques. Featured artists here are a.o. Walter Elst, Eddy Stevens, Jan Bouman, Candace Charlton, Frans Klerkx, Ray Donley, Evert Hartog and others.
On weekdays Séverine Morren is present at the Oudegracht accompanied by Marianne Venderbosch. On weekends the gallery is hosted by Marianne Venderbosch and Emmy Luidinga-Cino. Emmy has a medical carreer as a responsable at the pedriatic ward, specialized in trauma-cases. Besides that she is a scupltor. Together with her husband, poet and author of artbooks and publications Gerrit Luidinga, she is and always has been deeply involved in the artworld.